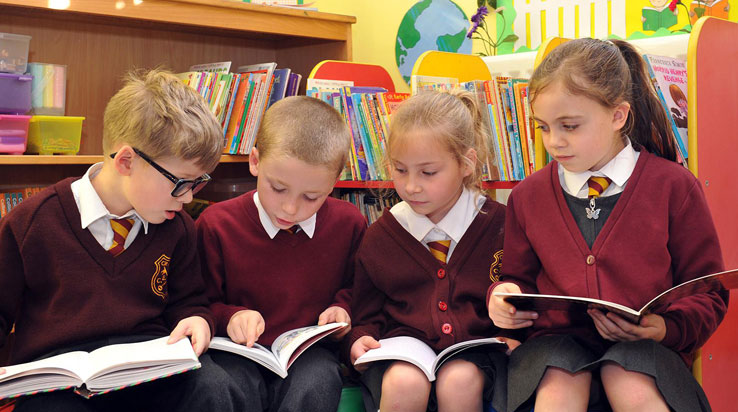 Cradley Church of England Primary School is a one-form entry Voluntary Aided Primary School in Halesowen in the West Midlands, with over 200 pupils enrolled. The staff, parents, pupils and governors pride themselves in a shared set of values – respect, trust, caring, courage, perseverance, forgiveness, resilience and belonging – and it is all of these which make Cradley so special.

RM have supported the school for over 20 years, managing and monitoring all of their technology equipment, their server and all school software. Each term starts with a meeting between the school’s Computing Coordinator, and RM’s Technology Account Manager to discuss their IT plans for the school, as well as to address any issues that the school may be encountering.

At the time that the Prime Minister announced that schools would close to the majority of learners on 20th March 2020, children at Cradley C of E School were using Purple Mash as a hub for learning, being the basis for their computing curriculum. They had begun to make some small steps towards the cloud but this was a long way from being embedded in daily practice, with teachers and admin staff relying on home access to the school server via RM’s proprietary remote access solution, CC4.

In the final week of school before the lockdown came into effect, the school looked into the possibilities of implementing remote learning quickly whilst using technology that children and parents would be comfortable with navigating. With guidance from RM, they concluded that Microsoft Teams would be the most suitable platform.

By the end of that final week, all the children had a pack which contained their username and password (all verified personally by the school’s Computing Coordinator), a short user guide to access Purple Mash and MS Teams from home (both with step-by-step instructions, illustrated with screenshots) and a timetable of individual work devised by class teachers that could be accessed through Purple Mash (along with some paper based work).

A separate “team” for each individual class was also created on MS Teams at this time, with each child allocated accordingly. At this stage, this was solely used as a way for parents and children to keep in contact with teachers easily, to ask questions and to hear updates.

After the first week or two, the computing team at the school were getting fewer and fewer questions, and the ones they were receiving they found they could now solve almost instantly. Since then, their remote learning offering has constantly evolved and they now have the vast majority of the school accessing all their work without issue through remote learning, with only around 10% needing paper packs that they collect from the school office.

“It has been stressful but ultimately rewarding! At the beginning, different issues with accessibility at home arose and we had a lot of requests from different parents that needed our support. However we quickly found that in sorting these, our staff members became adept at the solutions so we could offer suggestions quickly and solve problems much sooner.”

Microsoft Teams began as just a way to keep in contact with students and parents easily but has evolved further and further. It is now used as the primary way that the children right across the school access their work for the week, with work packs being uploaded as assignments that the children view and ‘turn in’ when completed. This allows the children to upload their work, for teachers to give feedback, and for the teachers to see in an instant who is accessing the work, leading to phone calls and offers of support for those that have not.

Other files are also uploaded to the team hub for optional activities the children can undertake or any additional resources that they may need to complete as part of their assignments. Teachers upload videos regularly – from class reading books that they share with the children, to method videos to support children’s maths work.

“This could not have been successful without the incredible hard work and commitment of all the staff at the school, who have tirelessly created and uploaded work for the children to access and respond to every message/question posed by both children and their parents on the MS Teams message board and through emails they may receive.”

The team at Cradley C of E School feel very fortunate in that all of their staff have embraced every initiative put forward to them and been fully supportive of it and to each other. Parents have been the same, and – bar a few teething problems at the beginning – the whole process has been relatively painless.

RM have played an important role in being there for the School when they have needed them. For example in offering solutions to some of the initial problems some parents had accessing the remote learning sites which they could not solve themselves; to issues editing assignments on MS Teams when in school, that the RM team solved within the day it was reported.

“Actually the biggest support RM provided happened well before the outbreak was even thought of as a possibility. Our Account Manager had briefly highlighted some of the things that MS Teams could do for us, should we want to go that way – a discussion that gave me some basic familiarity with the software, such that when the need for remote learning became a necessity, I understood enough that I could research it further.”

The use of MS Teams has had an immeasurable impact on the pupils at Cradley C of E School. It has been a safe space to keep in contact with teachers, providing the face to face contact they require with the videos the teachers upload and has made rolling out new work easy for staff whilst also keeping the school’s costs down with regards to resources.

“The support we received from RM in the early stages enabled those who were struggling to access the remote learning platforms, which has had a big impact on their development throughout this uncertain time.”

Given the journey that schools like Cradley C of E School have been on, it would be almost criminal to dispense with this as soon pupils return to the classroom. Instead, the more forward looking schools are looking at how they can embrace this technology in their classroom of the future.

But there is much more that should come out of this period. For Cradley C of E School, there is a genuine hope that as a school – and for individual staff – they will have cemented even greater bonds and relationships with the families and children that they serve. By responding to their needs, letting them voice their opinion on the school’s remote learning strategies and keeping in constant contact (either through MS Teams, email or telephone) they can move forward together as one with an even stronger partnership than they had before the outbreak.

“When you have such a successful system in place it would be ridiculous to just discard it the second we return to 'normality'. We have already briefly begun discussions of how we can implement MS Teams into the fabric of normal school practice and I cannot see a way in which MS Teams would not be a part of our school moving forward.”