How a multi-cultural Primary School in East London took the pandemic in its stride, using it as the catalyst to move to a cloud-enabled school where collaboration sits at the heart of everything they now do

Ellen Wilkinson Primary School is a remarkable two-form entry Primary in Beckton in Newham, East London. With nearly 500 children, pupils come from a wide variety of countries (over 40 at the last count) speaking over 35 languages. The school are extremely proud of their multi-cultural community believing that it gives them a unique chance to learn from each other, adding vibrancy to their curriculum and school. Around 70% of their pupils have English as an additional language and almost a quarter of them are in receipt of free school meals and yet the school still meets and exceeds national attainment in all key stages.

Newham itself is one of the country’s most deprived boroughs, with pupils from families facing many challenges. As a result, the school has had to work hard creatively to engage their children, doing a lot of work with international schools via the British Council, and looking for ways to compensate in the provision the children receive.

“On entering the workplace, we know that children from these backgrounds need to be even better than children coming from other schools” 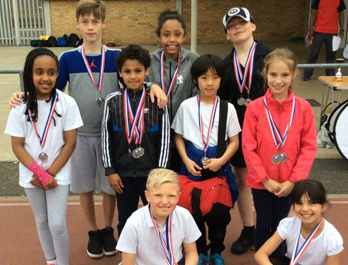 Armed with this mantra, the school have taken the role of technology seriously, working with outsourced IT Managed Service providers for a number of years, switching to RM for this service around 3-4 years ago – supporting all of their technology needs – alongside their own Computing Lead and Network Manager.

For some twelve months before the Covid pandemic arrived, Ellen Wilkinson Primary School were talking about the need to move to a cloud-based technology infrastructure. They recognised the value this would bring in a more efficiently run school, a cheaper network to manage, plus the benefits from reducing many security risks as well as future-proofing the school.

That said, their underlying infrastructure was not great – their Wi-Fi was poor, they had inadequate computer devices, and many that they had were out of date and/or sub-standard.

“We made the decision to upgrade all of underlying infrastructure during the coming 12-18 months. Then Covid hit, and that luxury disappeared in an instant”. 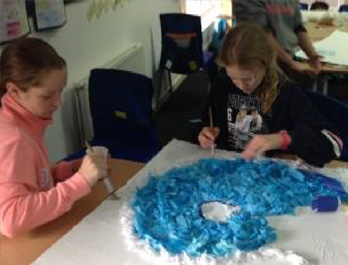 With support from RM, the school quickly moved into the cloud, working together with the Computing Lead and Network Manager to roll out Google Classroom right across the school, during the 2020 Summer Holidays. Staff returned at the start of September with a day’s intensive training, and from that moment on, all of their work was done on Google.

“We have a full range of staff – from those already accomplished with technology to those who this was far from natural. Sadly, we did not have the luxury to refuse, and I have been delighted by how well everyone has taken to it. It would now be considered unnatural not to use Google Classroom”

Better still, the period of the pandemic brought many communities together – the level of collaboration between teachers, pupils, and the wider community – has been incredible. This has been essential at a time when you cannot get people in the same place at the same time.

For Ellen Wilkinson Primary School, they started by taking teachers on the journey, before moving to support staff. They did this by putting certain things solely online – such as weekly briefings – forcing staff to log-in to get them – it was not put on noticeboards nor was it emailed to them – they had to log into Google Classroom to retrieve it. This made logging on and off a habit, and they never looked back.

“This would not have been possible without the commitment and capability of the staff in the school – in persevering and implementing this new approach – with one goal in mind – to keep children at the centre of everything we do”.

From here, they sought to automate many forms – such as records of behaviour and absence – which are now on Google Classroom. This has brought many new benefits as they have been able to put analytics behind it, to identify themes to help them with better interventions.

For office staff, this became a routine – to see which forms they would automate next – recognising that a form that was online was one less piece of paper to create, to transcribe, or to lose. The benefits quickly came. They then moved to parents – getting them to update their contact details online, collecting new information such as whether they were Key Workers or whether their children had access to a computer device at home – and if so, if they had to share it with others. This again, gave them new information on those children who needed extra support.

There was lots of trial and error on what would work, and whilst Google Classroom is intuitive, it is not as flexible a platform as – say – Zoom (although it has many other benefits). In some respects, the two platforms can work side-by-side. For Ellen Wilkinson Primary, a child who is forced to self-isolate can Zoom into a lesson, working side-by-side with other students, even though they are doing it from home. This was important as it meant that teachers did not have to deliver two versions of the same lesson, and hence there was no detrimental impact on their already stretched workloads.

Once all the staff were using Google, they focused on engaging the children on the same platform. The first challenge was passwords – ensuring every child had one and could remember it. Very much like the staff, they encouraged the children to log in and log out repeatedly.

“The first week with the children going online was carnage. But they soon got a hang of it. In a class of 30, within the first ten weeks we had three-quarters using Google Classroom regularly”. 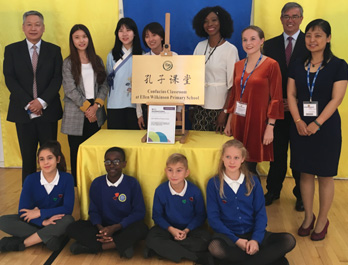 They started by issuing one piece of homework – via Google Classroom. Something simple, such as “type your name and send it back”, but as they became more proficient, so did the tasks.

Getting the children using the system was key, as they were the route to their parents.

Getting parents online proved especially challenging. Ever resourceful, the school produced Zoom guides, and even dropped hard copies of instructions through parents’ letterboxes. Many parents were reluctant to engage, with many lacking the technology they needed. As a result, many of the digital forms that the school produced had to be smartphone-friendly. They also offered parents the opportunity to phone in to the school, so they could talk them through the necessary steps.

One of the bigger benefits was that the school had RM Unify at its core – a simple application that enabled them to centralise all of their applications with simple password access, so they could use RM Unify as the springboard into Google Classroom and the various software applications and forms they needed. Even many parents were soon happy to use this.

Another new discovery was Google Translate – a very simple programme that has revolutionised the way the school has been able to operate – used both by admin staff in sending notices home and in class – such that they now do not need to provide additional support to a child who may be struggling with the language.

“Google Translate has really enabled us to speed up language appreciation by children who are new to this country”.

All of this underplays the hard work that the school have had to do to make this all happen (in double quick time). Because of the state of their underlying network, a lot of things had to be done from scratch – such as setting up folder pathways. Whilst this was tricky, it actually was a blessing in disguise as it gave the school the opportunity to start again.

“Whilst we are a 30-year-old school the move to the cloud gave us an opportunity to behave like a brand new school – looking afresh at how best we wanted to structure things, making it easier to find things and work more efficiently”.

It also plays down a lot of the work that RM did to put the school into this position.

“RM’s training has been brilliant. It was not an ‘out of the box’ standard package but was customised to our specific needs – we could not have made the steps we have in any other way. RM also worked brilliantly with our in-house Computing Lead and Network Manager – who were both instrumental in driving this forward“.

One of the advantages that a company like RM brings – in working with almost 8,000 schools in this country – is their experience, and hands-on knowledge. Whilst the pandemic was new to everyone, the team at RM quickly shared best practice from their dealings with different schools in all parts of the UK, and very quickly that knowledge was benefiting others. This was especially true for schools like Ellen Wilkinson Primary who were not aware of the potential of some of these new things.

“RM were great for us. There was no expectation of how far we had to go, and they helped show us the way, without dictating the path we had to follow. We felt in complete control, but with a coach stood alongside us to guide us”. 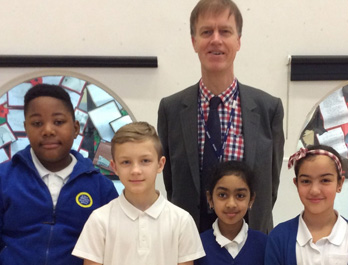 Whilst the pandemic caused a lot of pain, it did reveal how resourceful society can be, and how much can be achieved against the odds. In the case of technology – most of it was already there – it was just that schools did not know they needed it nor had a “burning platform” upon which to act.

“Let’s be honest – Covid could eat you up and spit you out – we had to ride the wave and go with it. We would never have got so far without that as the catalyst, but now that we have, we would never go back”.

It is important that we learn from this, as we move ahead. If you look at the workplace of tomorrow, everyone will be using technology in some form or another. Equipping children with those skills in Primary School will ensure they are well versed when they get to the job market. People will probably work with other people across the globe, and hence will need to be comfortable communicating in ways they are learning now.

“Don’t ignore it – explore it. Whilst the instinct is to go away and hide – or perhaps to go back to the old ways – the opportunity is there to revisit what is important, and why things are done in certain ways”.