It’s a little over ten years since I helped my first school move to the cloud. Since then, I’ve worked with hundreds of schools of all sizes, phases and sectors. I’ve worked with federations, local authorities, multi-academy trusts, academy chains and the other organisations that define the current educational landscape in England and Wales. Some of my projects have been wonderfully successful, and some - particularly in the early days - have simply failed to reach critical mass, and I thought it might be useful to examine what I’ve learned from the experience. What are the themes which emerge time and time again and have allowed me to shape my service to improve the chances of success? Who knows - this might even help you with your own journey to the sunny uplands of cloud-based working.

The first and inescapable conclusion I draw is that change is really hard, and I’m tempted to say that it’s harder in education than anywhere else. And that’s a problem, because change is a constant, and the pace of change in the outside world is only going to get faster. If you think we’ve seen a lot of change in the last ten years, hold onto your hat because it’s about to get really exciting! Everywhere you look, there are disruptive technologies about to transform life for all of us: soon, we may well be printing replacement human organs, looking through our head-mounted screens (rather than at our phone) to get rich social data about our interlocutors, speak to our home and other smart objects which get their power from the wifi signal itself, carry personalised health apps based on our DNA and of course summon a driverless cab when we need one. Our grandchildren may be living (and working) for twice as long and having five times as many jobs as we did. If we believe that the purpose of education is to prepare young people for life, then the mix of skills and content they need for this new world may be quite different from those needed by previous generations, including mine.

Now many teachers and others in the education sector will quite rightly say that they have had to deal with an avalanche of change over the past few years, that in fact their lives have been plagued by an endless diet of tweaks to the system. I’d agree, and I’d also say that I don’t think it’s limited to education: government has developed a mania for measuring the measurable and then for evaluating performance based on those measurements. Health workers and the police have suffered the same fate, often with battalions of middle-managers doing the measuring. I’m not anti-data per se: it’s just that I sometimes question the usefulness of much of the activity and worry about its impact on the workforce. Staff morale is crucial in people-centric systems like schools.

However, the change I’m talking about is bigger than these tweaks to the system which government loves and most education practitioners don’t. What I’m talking about is the sort of change that disrupts the standard model and challenges the received wisdom. I’m lucky enough to work with some schools in this country and abroad which do precisely that: where there may be no desks in the classroom, and if there are, they aren’t in rows. Where the teacher isn’t in a fixed location at the front of the class. Where there are no expensive interactive whiteboards but rather devices in the hands of children. Where there is real student agency and the role of the teacher is transformed into that of coach and mentor. Where the school leaders trust their staff and mistakes are permitted as long as you learn from them. Where the default position to data, systems and tools is ‘open unless it really needs to be closed’. In schools like this, you get the strong impression that the most important objective is not the A*-to-C number or the Level 5s so much as the empowerment of students and staff alike to take control of their own learning.

This kind of change needs a few essentials to be in place before it can have a chance of being embedded at the cultural level. Is your school ready for that sort of journey? Have a look at this list of important elements and see how many you think you have in place: 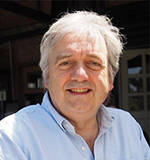 Mark is an educational consultant who has been helping schools in this country and abroad move to the cloud since 2006. He’s a Google Certified Innovator and Trainer who works with schools on implementing their strategic vision and is currently launching a simple online CPD platform called 123GO! He’s an inveterate sharer on social media and you can find him at @edintheclouds on Twitter.